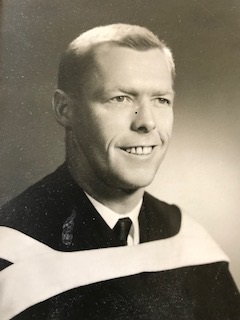 A private service will be held for the family.

John Booth of Sutton, Quebec passed away peacefully on Friday, July 9, 2021, surrounded by his loving family. He was 89 years old. John is survived by Gail, his devoted wife of 61 years, his adoring children Janet (David St. Croix), Carolyn (Tom Darling), and Geoffrey (Jason Donaldson), and his beloved grandchildren Charlotte and Emily St. Croix and Brian and Iain Darling. He is also survived by his siblings Sidney Booth, Valerie Butler, and Michael Booth (Ann Lepowski).

John was born in Montreal, Quebec in 1932 to much-loved parents Valeria and Alexander Booth. In 1949, he moved with his family to Abercorn, Quebec, where he worked the family dairy farm. In 1960 he married his beloved wife, Gail Fry, and they moved to Montreal’s West Island to raise their family. John earned a Bachelor of Commerce degree from Sir George Williams University (now Concordia U.) in 1965. He went on to enjoy a nearly 30-year career with GTE Sylvania, specializing in operations management. John enjoyed many happy summer vacations with his family on Brome Lake, and in 2000 he and Gail retired to Sutton, Quebec.

John enjoyed skiing, sailing, and waterskiing with his children and taking rides in his vintage Triumph sportscar. He was proud of his Scottish heritage and enjoyed visiting family in Scotland as much as he did hosting them in Canada. Together with Gail, he explored many regions of Canada on long car trips. He also loved working outdoors and continued to help out on the family farm until well into his seventies.

Our deepest sympathies to all the families.

To Gail and family: Thinking of you all at this time and sending my sincere sympathy. I have fond memories of John and hoping your fond memories of him will help to sustain you through this sad time. You are in my thoughts and prayers. Love Barbara and family.