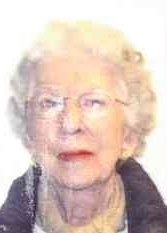 Tuesday May 3rd, 2016, from 12pm.The funeral will follow at the Complex at 2pm, followed by the interment at the Philipsburg Cemetery.

In lieu of flowers, donations to a charity of your choice would be appreciated by the family. Different forms will be available at the Complex.

Passed away peacefully with her sister Mary Ann Smith at her side, at the Centre d’accueil of Cowansville, on April 28, 2016, at the age of 98. She was the daughter of the late James Smith and of the late Mary Gough. She is survived by her dear sister Mary Ann and her brother Stanley (Vivian) of Halifax. She is predeceased by her brothers James, Leslie, Sidney, Harold, Arthur and Patrick and sister Theresa. She was loved by her many nieces and nephews, as well as many other relatives and friends.

Dear Mary Ann - so sorry to read about Evelyn - very sad for you. I have good memories of our days at OR, and lifts home when there were bus strikes. Also the little gray cat, Tiny Smith... Love and sympathy, M.A.

I always remember what a gracious hostess my Aunt Evelyn was. Anytime we visited she would prepare a pot of tea and serve delicious homemade cookies. Also her profession was as a Dental Technician and she was always concerned about the health of my teeth. She was always soft spoken and had a great sense of humor.

Please accept our sincere condolences and heartfelt thoughts. Our memories of the many visits to Philipsburg having fun, chats, laughter, good food and cheer will never be forgotten. Dennis, Jody, David and Melissa