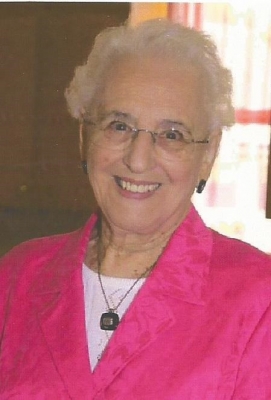 The date of a Spring memorial service will announced at a later date. Arrangements entrusted to: BROME-MISSISQUOI Funeral Complex in Cowansville

It is with great sadness that we announce the passing of Shirley Cowan, passed away on December 16, 2019 at the BMP Hospital in Cowansville, QC, daughter of the late Muriel and Leslie Holden, Resident of Sutton, QC. Shirley was predeceased by her husband Dennis and her son Stephen, as well as her brothers Jack and Wally. She leaves to mourn her sister Jean de la Mare, (Roger), her nieces and nephews Mary, Sharron, Heather, Betty, Phillip, Karen, Matthew, Michael and Kevin. She will also be greatly missed by her great nieces and great nephews Julie, Frankie, Amy, Jennifer, Michael, David, Tania, Jordan, Quin, Landon and Colton and nine great great nephews and nieces. Shirley was an employee of the Canadian Imperial Bank of Commerce in Sutton and was the organist at Grace Anglican Church for 73 years, where she also served as President of the ACW and the Altar Guild. She will be dearly missed by her family and many close friends. The family wishes to thank the staff at the Chartwell Residence Principale and at the BMP Hospital for the special care she received.

My sympathies to the family, she was a very regal lady.

So sorry to hear this Jean. Our thoughts are with you and all the family. Shirley was a great lady and was loved by so many people.

Sorry for your loss Jean & Roger

Our dear friend we will miss you and your love and kindness, now and always. GOD BLESS.

Beautiful person with a great sense of humour. Rest In Peace ??

My deepest sympathy to the families

My deepest sympathies, great person she was??

My sympathies to Shirley's family. She was a wonderful person and I enjoyed working with her at the CIBC. She will be missed.

I'm so sorry to hear that Shirley has passed on. She was always such a lovely lady. I remember her working in the bank when I was young and being a neighbour around the corner from us she was always so pleasant and kind. Her smile was always radiant. She is now at peace and in the arms of her loved ones, her husband Dennis and son Stephen. Her organist abilities were marvelous. My condolences to Jean and Roger de la Mare as well as her many nieces and nephews. RIP beautiful lady.