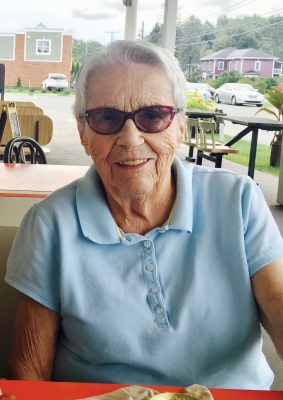 The visitation for Miss Eleanor Jeane Corey will be held privately at the Brome Missisquoi Funeral Home in Bedford and burial will be at the Stanbridge Ridge Cemetery in Stanbridge East.

Miss Eleanor Jeane Corey, who was always called “Jeane,” was born on April 3, 1925, in Stanbridge East to Mr. Frank Leslie and Mrs. Annie “Edna” Corey. Jeane Corey passed away peacefully at the Wales Home in Cleveland, Quebec, on March 28, 2020. For the final eleven years of her life, she was a happy resident and active volunteer at the Wales Home, serving at the front desk, assisting in the rummage sales and coordinating the chairs for Sunday worship. Jeane Corey lived a full life, always working hard and always willing to serve. She was raised on Ridge Road in Stanbridge East with her two older brothers, Douglas Earle and Hugh MacLeod, where she helped tend to the daily responsibilities of farm life. Jeane, the only daughter, rolled up her sleeves and worked alongside her parents and brothers milking cows, driving tractors, cleaning barns, mending fences and anything else needed to manage the Corey Farm, established in 1859. When her brothers were no longer at home, Jeane continued handling the upkeep of the Corey property on Ridge Road. After graduating from Granby High School in 1942, she enlisted in the Canadian Women’s Army Corps. Over her several years of loyal service to her beloved Canada, Corporal Jeane Corey dutifully fulfilled important responsibilities on an Ontario inspection crew going from one military base to another inventorying equipment. Her meaningful work in the military came to a conclusion at the end of World War II, and she was discharged in September 1946. Jeane then returned home to the farm on Ridge Road to begin a long and respected career as a payroll administrator for the Torrington Company’s manufacturing plant in Bedford. Upon her retirement after nearly forty years at the Torrington Company, Jeane turned her attention to caring for her aging mother and continuing her service at her local church and throughout the Stanbridge East community. She lived on the Corey Farm until the death of her mother, Edna, in 1994. Though Jeane made her residence in Stanbridge East, Bedford and Cleveland, she was well-travelled far beyond Quebec. She not only toured extensively throughout Canada and the continental United States, but she also took trips to Cuba, Bermuda, Scotland, Norway, England, Alaska and the Caribbean. Jeane’s life of humble service made an unforgettable impression on the lives of friends and strangers. Though in countless ways her family was the beneficiary of her kindness, that kindness also extended far more widely. Her service for many years as a faithful member of Richford (Vermont) Assembly of God Church, her expressions of help to her neighbors on Ridge Road and throughout Stanbridge East, her volunteering for Meals on Wheels, her contributions to the Missisquoi Museum, her help at the United Church of Stanbridge East and her willingness to assist in any capacity at the Wales Home were just a few expressions of her life of generosity. Those who knew Jeane spoke most about her loyalty, her selflessness, her humility and her thoughtfulness. If they were to ask Jeane why she lived this way, she would say that it was simply an extension of the grace that God had unconditionally shown to her. Jeane lived a life of faith rooted deeply in her commitment to trust God for all things. Jeane Corey was predeceased by her two brothers, Pilot Officer Douglas E. Corey who passed away in a 1942 Royal Canadian Air Force plane crash in Newfoundland and Rev. Hugh M. Corey who passed away in Boston in 1998. She is survived by her sister-in-law Mrs. Esther Corey of Springfield, Missouri; a niece Mrs. Bonnie Jeane Mills (late-husband Ossie) of Tulsa, Oklahoma; a nephew Dr. Barry Hugh Corey (wife Paula) of Fullerton, California; and a great-niece and four great-nephews: Ella Grace Corey, Anders MacLeod Corey, Nicholaus Christopher Mills, Alexander Corey Mills and Samuel Earle Corey, all between twenty and twenty-seven years old. Jeane also counts among her closest friends Geraldine and Norman Jourdenais of Stanbridge East and Pat and Marty Hoadley of East Berkshire, Vermont. In lieu of flowers, gifts in Jeane’s memory may be given to the Wales Home in Cleveland, Quebec.

I worked with Jeane for a few years at Torrington. I loved working with her. A great lady is now wearing beautiful wings.

My condolences to the family Corey. Jeane was a very special lady.

I voluntered with Jeane for over 25 years for the Canadian Cancer Society.When she could no longer place the wreath at the cenotaph in memory of her brother, after she moved to the Wales home I was more then pleased to do it for her.Also I have fond memories of our time together organizing the B.H.S.reunions.She will be missed by many.

My condolences to the family and friends

Our condolences to the Corey famil and all of Jeane's good friends.May Jeane R.I.P.

My condolences to the family. I worked with Jeane in the payroll department at Torrington for many years. She was a very kind and generous person.

Jeanne was was our last surviving veteran of 39 to 45 world war and was one of the oldest members of the United Church. Saw her almost daily at Torrington Co. and though she had been absent from Stanbridge East. I am sure many others will miss her as much as I do !! She has earned her rest !!

Jeane was one of the most wonderful people you could ever know. She was kind, funny, so involved and always so welcoming. She was a gem at Girl Guide Camp at Jamison Point.and my memories of her through the years bring only smiles. She will be missed by all who knew her.

I remember Jeane very well from my youth. She was my Girl Guide Captain in Guides in Stanbridge East. She worked with my Dad, Lawrence Perry at Torrington Needles in Bedford. Also remember her from The United Church in Stanbridge East. . She was very involved in the community. Very smart lady and always pleasant to chat with. Rest in Peace Jeane.

I am very sorry. I worked at Torrington with Jeane, a very nice person. I got married and moved to Cowansville.

We were saddened to learn the news of Jeane's passing. She will be missed ; as she was when moving away from Stanbridge East. She had a very dry and wry sense of humor and always had wonderful stories to share. Our sympathy to her family and close friends.